The Prettier The Nastier

The sun was shining brightly this Sunday morning which was definitely something to be glad about in Beijing, especially when you are living in a city reported to have the highest and tiniest pollutants in the world.

I was at my Jamaica Coffee, my normal coffee joint just outside our apartment having my daily `engine starting’ mocha with extra chocolate. Tina, the cashier and server behind the counter was her usual cheerful and jovial self, someone whom we have gotten to know over the months, taking our orders.

As I was waiting to pay, in came a young Chinese lady, dressed in white winter jacket with high heel boots, hair neatly tied up carrying a Burberry handbag. She walked over to the cake’s counter and was asking the server whether they have any fruit or vegetable cakes. The server politely replied that all they have at the moment was the pumpkin cake of which she was not keen. With a frown and a tone akin to a master questioning a slave, she asked why are fruit cakes not in the menu.

Next, she asked for a glass of water. Tina brought her one and she took the glass of water up and inspected it as if she was expecting to find a fish swimming in it. “Are you sure you can drink this?” she asked with a frown and disbelief. I took a glance at the glass which is just next to me, and I see nothing wrong. But it was not her question or her doubt that troubled me. It was her tone. It was totally impolite and outright rude.

And this incident is definitely NOT an isolated incident in Beijing after my four months here. I was telling my wife that the prettier the girl is in China, the nastier is her personality and character. I was sure that this one is rich and my eyes followed her out from the café after she got her coffee. She went straight into a matching gleaming white 5 series BMW! Arrrrr….my theory proven right yet again….

In my short four months stay here and the numerous people that I have encountered and observed in my daily routine as well as from the places that I have visited, I often find that the friendliest people are the people who struggles everyday to make an honest living, such as the ‘ahyi’s’ who worked as cleaners at our condominium, the security guards, the unknown taxi drivers (grumpy as they seemed but suddenly turned all chatty and jovial the moment you start greeting them and talking to them), the waiters and waitresses (even from the street side local eating joints) and street side vendors. I have yet to encounter one who would not smile back, whom sometimes looked surprised and stunned when I thanked them. Maybe, it is because they did not expect a gesture of appreciation from me in the first place. After all, I am a Chinese and I looked like a mainland Chinese.

The most unpleasant people that I have observed here in Beijing are:-
•    Young and seemingly well to do mainland Chinese, in particular those dressed in branded attires, carrying LVs, Pradas and Burberrys, driving in Porsche, BMWs, Merc and Ferraris (oh yes…you will see more Ferraris here than probably anywhere else in the world)
•    Chinese ladies dressed to kill, branded from head to heel who seemed to think that every man out there is actually looking at them and every other lady is envious of them.
•    Chinese ladies with a foreigner in tow as a boyfriend, especially if the boyfriend is driving an expensive car.
•    Foreigners (Laowai’s) working here who thinks that being an expatriate elevates them to a status higher than the locals, not for a moment understands that they are in China not because China needs them but they needed China and her market more than anything else in the world. 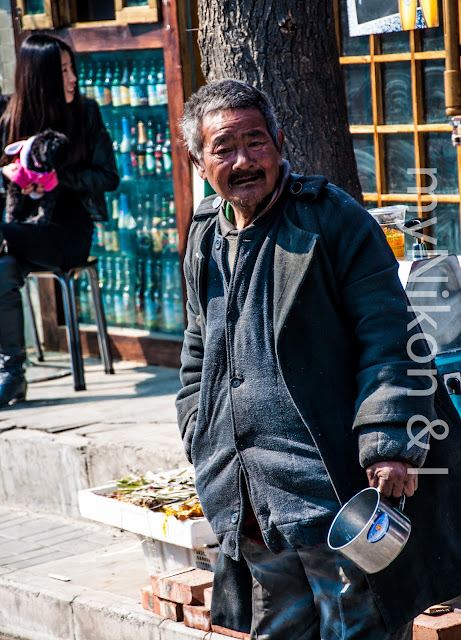 The disparity between the rich, the average and the hard core poor here is huge to say the least. I have seen rich driving in the most expensive cars, ordering food enough to feed ten when they were only two eating, wasting and throwing away most, the average office worker struggling and working 7 days a week (even on Sundays) to survive in this thriving city to the hard core poor wondering on the streets.

Have the opening of doors help China in anyway? When I first visited China in eighties, mainland Chinese were reported to be lazy, unmotivated and undependable. While visiting a factory, workers were openly napping or gambling way past lunch break.

Today, I am seeing an entirely different group of people far from being lazy and unmotivated. Banks remain open for business on Sundays. Offices workers working till late at night. Real estate agents standing by road side handling out brochures in chilling negative winter temperatures on a Sunday.

I believed that the policy has definitely brought plenty of opportunities to many in China and today, they probably have some of the richest men around with plenty of cash to splash. The opportunities have also, I believed, spurred many to work even harder, knowing that they have possibility to make a better life for themselves. However, with the growing economy, it has driven prices up, making it so much more difficult for many to survive and to make a decent living.

What I find disturbing the most, is the seemingly arrogant and ungrateful attitude that the younger generation seemed to have adopted from their lavish lifestyle and their adopted `Western’ pleasures and tastes, many of whom are generations `after’ the opened door policy and have not experience the hardships of their forefathers, with complete disrespect of another countryman of another `economic’ or `financial’ standing.

I am often mistaken to have come from either Hong Kong, Guangzhou or Singapore because of the stammering Mandarin that I conversed in and the Cantonese that is my mother tongue. “No! No! Not from these places” I would often find myself explaining.

“Then where are you from?” they would asked curiously.

“MALAYSIA!” I would proudly proclaimed and I AM PROUD to be a MALAYSIAN because only a Malaysian with our unique multi culture, religion and race presents the opportunity that we have been brought up, learning to be polite, friendly and respect another person, irrespective of culture, religion, race, gender or economic nor financial status.